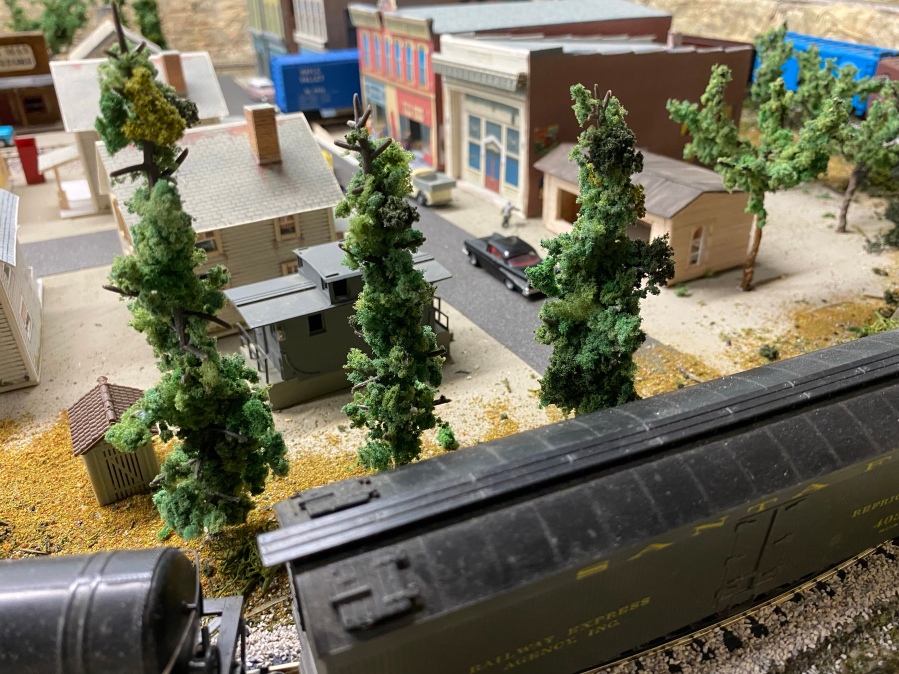 It began as many stories do, with nothing. I wasn’t planning to write an endless saga with characters no one has ever heard of. It just happened. Sheriff Pete Terkinberry, and all the other good folks from Maple Valley politely introduced themselves and took over.

I was helping to clean out a small barn that was full of grubby things saved and thrown in for thirty years. Mouse-infested insulation, rotted wood, rusted tools, and piles of raccoon poop had to be shoveled into garbage bags. I finished the job that took us an entire weekend by cleaning every square inch with a pressure sprayer. That’s when I saw it.

Hidden at the bottom of a wall between the century-old studs was a burned, melted, and twisted little black car. I picked it up and examined it. I imagined it sitting on my HO scale train layout.

A few weeks later, I was down in the basement in my train room. I put the little mangled car under what is now called, “Three Tower Bridge.” That’s when it happened. I thought, “There’s a scandal in Maple Valley. Sylvia Meisner has been missing for two weeks and no one knows what happened to her. A burned car found under the bridge looks like hers.”

The wreckage was discovered by two joggers who happened to pass by and reported it to Sheriff Pete Terkinberry. The two were immediately considered to be suspects, but no one knew why.

Mayor Alvin Thrashborn introduced himself pretty quickly after I met Sheriff Pete. Alvin and Pete are lifelong friends and grew up in Maple Valley.

I was calling my HO scale layout The Maple Valley Short Line Model Railroad long before the scandal began. I started building the MVSL four years ago.

As the story developed, more characters spoke up and soon it was a real investigation, trying to figure out who knew what and was keeping what from whom.

The first puzzle was figuring out where the car came from. It was totally consumed by fire, no distinguishing marks remained. Sheriff Pete thinks it’s Sylvia’s car, but he can’t be sure.

It quickly became obvious Maple Valley is a very special place with very normal people. Neighbors called Sheriff Pete because Ver and Vee Burthrap were arguing loudly about who spoke to Sylvia Meisner last. Shorty and Hannah Cloverton, owners of Ya’ll Sit Cafe, weren’t speaking to each other for the same reason.

Investigators were called in to take a look at the car before it was moved. The wreckage was then taken to a service station in Maple Valley, where it was completely dismantled. Nothing of any use was found in the process.

It has been eighteen months since Sylvia Meisner disappeared. The good folks of Maple Valley have continued to claim they know details others don’t.

Maple Valley is a popular tourist destination. One of the favorite attractions and a main character in the story is The Old General. The vintage steam locomotive, built in the 1800s, brings visitors to Maple Valley from Newtown.

In the midst of mystery and loss, life has continued in Maple Valley. Two Founders and Independence Day Celebrations, and two Christmases have come and gone. Presenting a pleasant and welcoming community to outsiders is the constant work of residents and business owners.

Many colorful characters have pushed themselves to the center of attention in Maple Valley. Quintin O’Dillmotte, of O’Dillmotte Funeral Home, “Where We Lay You Down Easy,” is a great example. It’s still not clear whether he is the source of information that was to be kept confidential regarding the investigation of Sylvia’s whereabouts. Quintin has now declared himself as a candidate to replace Pete Terkinberry as Sheriff of Terkot County.

The Reverend Shermer of Maple Valley Church has attempted to be a calming presence in town. He has his own struggles among his church members to deal with, but has offered support to Sheriff Pete.

Some characters played momentary roles, like Buck Wills & The Wagoneers, who sang their hit song, “Mama Drinks Whiskey from a Coffee Cup.” They were the headliner country band during the Founder’s Day Celebration. Hank Rider & The Saddlehorns hit the stage the following year and sang their hit song, “The Old Man.”

Those are two real songs I wrote, “Mama Drinks Whiskey from a Coffee Cup,” and “The Old Man,” and they are in the long process of being arranged and recorded.

Will the mystery of Sylvia Meisner’s disappearance be solved? Did she just leave, or did something happen to her? The first doesn’t make sense, the second is unthinkable.

Is Quintin O’Dillmotte thinking of anyone but himself?

The entire story, up to the current episode, is available on my blog, A Coffee State of Mind. All of the episodes can be found on the menu bar under Scandal at Maple Valley. Episode 1 will introduce you to the ongoing drama.

Scandal at Maple Valley is, obviously, fiction. Maple Valley does exist, however. It is the town on the east end of my HO scale layout, The Maple Valley Short Line Model Railroad.

I invite you to follow A Coffee State of Mind to receive updates on each of the continuing episodes of Scandal at Maple Valley. Who knows where, and if, this will end?