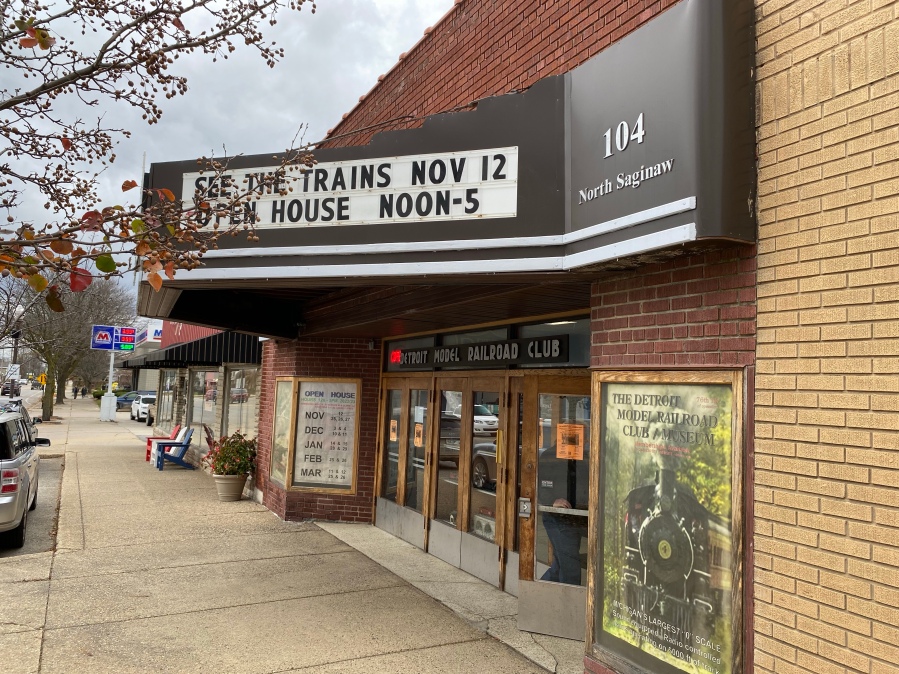 Saturday, November 12, was an exciting day because it was the first of many open houses at the Detroit Model Railroad Club. We have been to the Detroit MRRC many times, but there is always something new to see.

I first noticed this bear chasing a guy up a tree. This scene is just around the curve of the main line leading out of the City of Dorrance on the Detroit MRRC.

I am always amazed at the incredible skill team members have used to lay such perfect O gauge track. More than six thousand feet of it, all hand-laid. Incredible!

Years ago, a little farther along the tracks, there was a pair of legs, minus the torso, of someone who didn’t make it across the tracks in time to miss a passing train.

Our son and daughter-in-law are moving to Australia this weekend! Ugh! She is from Oz, but they have been living here for the past twelve years. It’s time to go home.

I brought our boys to the Detroit Model Railroad Club many times as they were growing up. Triplet boys can create a lot of excitement. Jesse wanted to make one more trip to the club before heading to Australia. Heaven only knows when we’ll get to do it again.

It was fun talking about what he remembered from the last time he saw the layout, and how much has changed.

On my own HO scale layout, I mostly run diesel engines. I model Sante Fe, but my layout is called The Maple Valley Short Line Model Railroad. I prefer steam. The motion of the drive wheels and push bars is beyond fascinating to me.

The cab-forward is one of my favorites. The Southern Pacific Railroad built the cab-forwards because engineers were being overcome by the smoke as trains passed through long tunnels in the mountains. So, they put the cab in the front of the engine! Brilliant. And beautiful.

There is nothing like watching a train rolling over a beautiful trestle, especially one that is curved. This amazing bridge is scratch-built and holds a prominent place on this huge O scale layout

These BNSF engines make an awesome run past spectators as everyone watches the layout in action, dreaming of having a huge model railroad back home in their basement.

I am always inspired by the craftsmanship in the scenes of the Detroit Model Railroad Club. Sometimes I feel overwhelmed by all that I still want to do on my own layout. I recently learned that working on detail in a small section, maybe no more than two feet square, is best way to go. The modelers of the Detroit MRRC have been working on this project since the 60’s!

These locomotives wait for a call to service on the main line of the Detroit MRRC.

No trip to Holly is complete for us without a visit to Battle Alley Coffee and the Bittersweet Cafe. We took our family to the cafe when our children were young. I don’t remember if the name was the same. Battle Alley Coffee was a new experience for our son, and he discovered our grandson was right when he said, “Battle Alley Coffee has the best hot chocolate in the world!”

It was another enjoyable visit to the Detroit Model Railroad Club, Battle Alley Coffee, and the Bittersweet Cafe. And, of course, we introduced our son to Altered Designs as well!